Description of the Djin Block no. 9

1.1 Description of the Site

Petra is the ancient Capital of the Nabataean Kingdom. The area is full of prehistoric sites, and according to the Bible Moses passed by the area, but was forbidden by the Edomites and their king from passing though Petra to obtain supplies of water for themselves and their animals. The Lord ordered him to “leave thy brother alone and bypass his territory”. He did only to lose his Brother Aaron, whom he buried (as the legend has it) at the highest mountain around Petra (Mount Aaron or Haroun in Arabic). The Nabateans slowly took over the territory as the Edomites started to evacuate after losing battles with the Jews and the Assyrians. The vacuum was filled by the Nabateans, who had been desert pirates raiding camel caravans trading with frankincense, myrrh and other goods that came from the Far East through Aden. They soon realized that giving protection and a haven to the caravans, made more profit than piracy. Petra soon became one of the most important trade centers and caravan stations in the Ancient World. By the year BC 400, it seems to have peaked in prosperity to become a full fledged city and capital of the Kingdom. This kingdom became later so large as to extend to Damascus in the North (as mentioned in the Apostles Acts of the New Testament, where St. Paul fled from the soldiers of the Nabatean King Aretas, by lowering himself in a basket down the city walls. All along however, Petra was a satellite Kingdom of the Roman Empire since the time the Romans showed up in the area. In contrast to direct occupation, The Romans often preferred alliances with peripheral states who were charged with the protection of the Empire’s borders. Nevertheless the Romans were envious of the prosperity of the Kingdom and they coveted the full control of the vital trade route between Aden and Petra which has become by then a node in the neural network of trade, connecting the Arabian Peninsula to Ghaza, Damascus, Bosra, Palmyra, The Euphrates basin and many other ancient cities. The Nabateans through diplomacy, bribery, and trickery warded off the Roman ambitions until direct annexation without much resistance occurred in the year 106 AD. Petra continued to prosper during occupation and during Byzantine times, when it became the seat of Patriarchate in the region. and the The discovery of the monsoon winds made offshore navigation safer, and thus an alternate trade route up the Red Sea started to steal Petra’s role as the hublink of trade. Evidence for the exact state of affairs in Islamic times is severely lacking, but it seems that earthquakes and the loss of the trade connection, drove its inhabitants to abandon it.

The Nabateans were famous for their sandstone rock carved monuments, their fine thin eggshell ceramics, and their water management skills. It is said that their water sources were so well guarded, and their city so well protected due to the rugged nature of the sandstone territories, that the Romans could not occupy Petra until they discovered the water sources that supported life and agriculture in the Capital.

Petra in zone 36 North in the WGS 1984 UTM coordinate system. It forms a plateau (around 850 m above sea level) surrounded by higher mountains (The Sharah Monutain range). The latter higher range are characterized by limestone deposits. At about 900-950 m elevation, Ordovician sandstone with its white color and high porosity is found abundantly. At lower elevations and forming the largest geologic deposit in Petra, Precambrian sandstone, with its beautiful multi colored mineralogical formations, predominates. After walking down a wide streambed called the Outer Siq, the visitor enters the Siq, which is a narrow gorge that forms an impregnable main entrance to the city. It is flanked on both sides by high cliffs, where a few soldiers could ward off an army with stones, perhaps hot oil, or any other means of war they could think of. Wadi Musa (Wadi is valley in Arabic) is a long, generally dry streambed, that meanders though the heart of Petra, for some 4-5 kilometers (it also includes the Outer Siq and the Siq). Most of the important monuments were carved from the Precambrian rock massif on both sides of the wadi (streambed or valley in Arabic) . Ordovician monuments are mostly found in the Outer Siq.

1.2 Description of the Monument

The monument chosen in Petra is the Djin Tomb (Monument Number 9, as per Brunowe and von Damazeuski). While most monuments in Petra are carved from the rock of the massif, very few are free standing monuments. Of the latter several tombs of Definite Nabatean origin are found in the entrance area of Petra. They are all carved from white Ordovician (umm Ishrin) sandstone that is characteristic of the upper sandstone formations of Petra. These are called Djin Blocks after the Arabic word for Genie. Djin Block number 9 is the largest of them all, and will be the focus of this study. It is shown as a red point on the left (Northern) side of the Siq in the map below. The green point is the location of Monument 825, which was the main focus of the Petra Stone Preservation Project, funded by the German Government, and utilized as the case study for compatibity assessment of previous conservation actions. Little black spots show the abundance of monuments in Petra, each point marking the location of a feature of varying importance in the site. Djin block number 9 is about 8.9 meters of height and square in plan with a side length of about 4 meters. Its four sides are all similarly carved with a grave on the rooftop. The block consists of 4 main units. The top unit is a block of rectangular sides but of squarish top. As seen in Figure 4.1.1 below the top entablature is very plain. Below it there is a rectangular groove in which stone insets are fixed with mortar. The row of stones forms a cornice all around the Block from all its sides. Each stone has a sharp triangular section with a horizontal side pointing upwards and a diagonal side facing downwards. Below, the groove, another entablature follows, lying on top of a thin torus and a wider fascia. The latter curves inward into a thinner entablature (the second unit). At the north eastern corner of this unit, another stone inset is noticed although it does not cover the perimeter of the block. Inside the inset there lies a hole that seems to form a conduit that could be for a clay pipe, although there seems to be no indication as to what purpose or from which point to which other point is the water being carried. The possibility that the hole is just a result of the The third unit is highest in elevation. On each side of the Block, Two engaged columns (of semicircular cross section) lie in the middle. On either side of the façade a pilaster is carved forming the right angled corner of the block. The pilaster is attached to a quarter engaged column on both of its sides, thus enhancing the overall side to side symmetry that is reflected in the architectural concept. The last unit, the base unit has steps that add to the majesty of the monument. An interesting observation can be made that the monument is surrounded in water features. This seems to be a religious ritual, that surrounds the tombs of notables in Petra.

The roof of the monument consists of a flat surface with a grave in its center (figure 2.1.2). To the North side an Ordovician sandstone hill formation is carved in such a way that people can climb an inclined path to reach behind the top of the monument. At this point the surface is flattened so that a small wooden or stone bridge provides access to the roof and the grave. This is sensible as the need to burry a person on the top requires this arrangement, although it is surprising that an incline plane rather than a staircase was used for the purpose of the climb. No evidence is noted that the incline was a staircase whose steps have been completely weathered. Perhaps the difficult climb was intentional to discourage climbing by unauthorized persons.

At the bottom of the Northern sandstone hill a channel that has been carved to carry clay water piping to the city of Petra. The water management around the Djin Block is extensive and its damage may have contributed to weathering of the monument.

Coming from higher up, the clay pipe meanders alongside the Outer Siq on the Northern side. It reaches around the bottom of the Djin Block number 8 and crosses above a small streambed (a wadi) to reach the floor of the Djin Block number 9, and passes into the channel at the bottom of the Northern hill. It seems to continue into or above a small streambed to the West of the Block. The small wadi lying east to the Djin Block 9, and above which the clay piping crosses, has a small dam that collects water form its upper regions. A open water channel, also coming from the higher region of the Outer Siq poured its content into the dam.

Map of the site of Petra showing The Djin Block No. 9 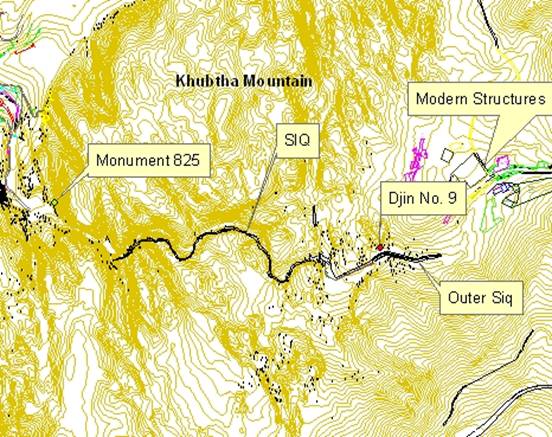 Figure 1.1: East side of Djin Block 9. Right represents the Southern side Figure 1.2- (a) Grave at rooftop with sandstone ridge behind. The ridge has a carved channel that used to carry a clay pipe behind the monument. (b) On the right a closer view of the rooftop showing the surface that was carved into a grave. Figure 4.1.3 View from top of surface workings on rooftop and on the ridge behind monument. Both surfaces were carved to prepare them to receive a platform of (wood or stone?) to allow passage from the ridge to the grave. The ridge is acceible up a difficult incline that may be the result of a carved staircase that has been completely weathered beyond any recognizable steps. Alterrnatively the inlcine was made without a staircase to discourage climbing to the grave. Center of picture shows the channels that carried water behind the Djin 9..

The Following pictures show the small dams that receive water from the channels in the top picture. The channel lying at a higher level pours into the dam. The clay pipe crosses above the dam and leads to the channel behind the Djin block. 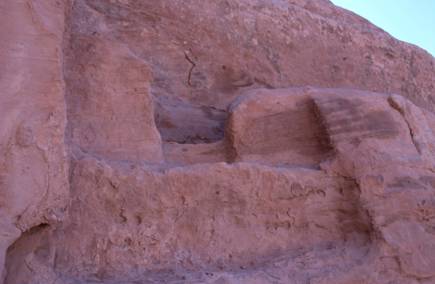 Figure 1.4 Channel outlet pouring into dam. The water pours into the Eastern dam as shown below. 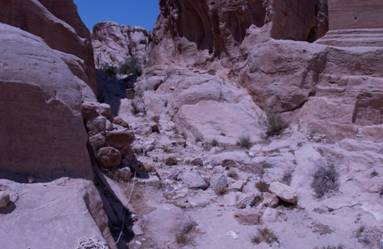 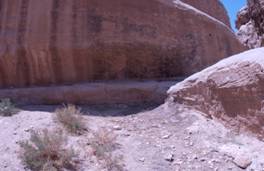 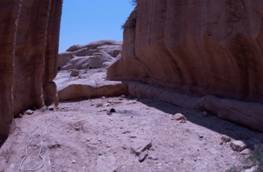 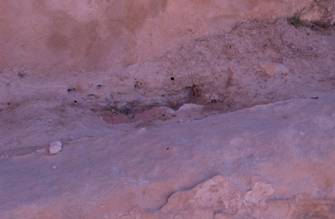